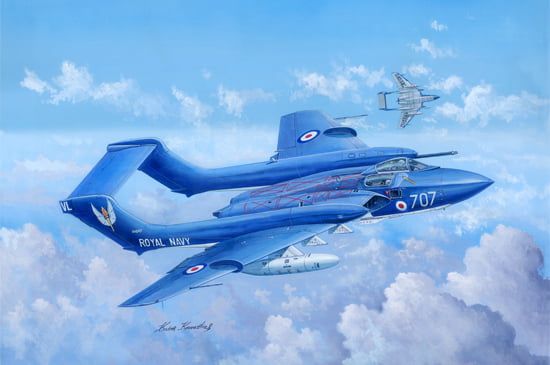 SEA VIXEN was a post-war British twin-boom, twin-engine, all-weather, carrier-based jet fighter developed and built by the de Havilland Aircraft Company of Hatfield as the DH110, production being taken over by Hawker Siddeley Aircraft. SEA VIXEN was in service with the Fleet Air Arm from 1959 until 1972.

A noteworthy feature of SEA VIXEN was the cockpit and canopy offset to the left. Maximum speed 690 mph.

Operational SEA VIXENS were retired somewhat early, some moving to training units at Yeovilton, and were replaced in service by US-built FG.1 Phantoms.

Starter Paint Pack Includes:
7 x 17ml Vallejo model paints. Vallejo paints are supplied in plastic bottles of 17ml with an eyedropper device which keeps paint from drying and prevents spills. The model color range has been specifically developed for adherence on difficult surfaces such as metal and plastic, but the product is not toxic, not flammable, and does not give off noxious fumes.