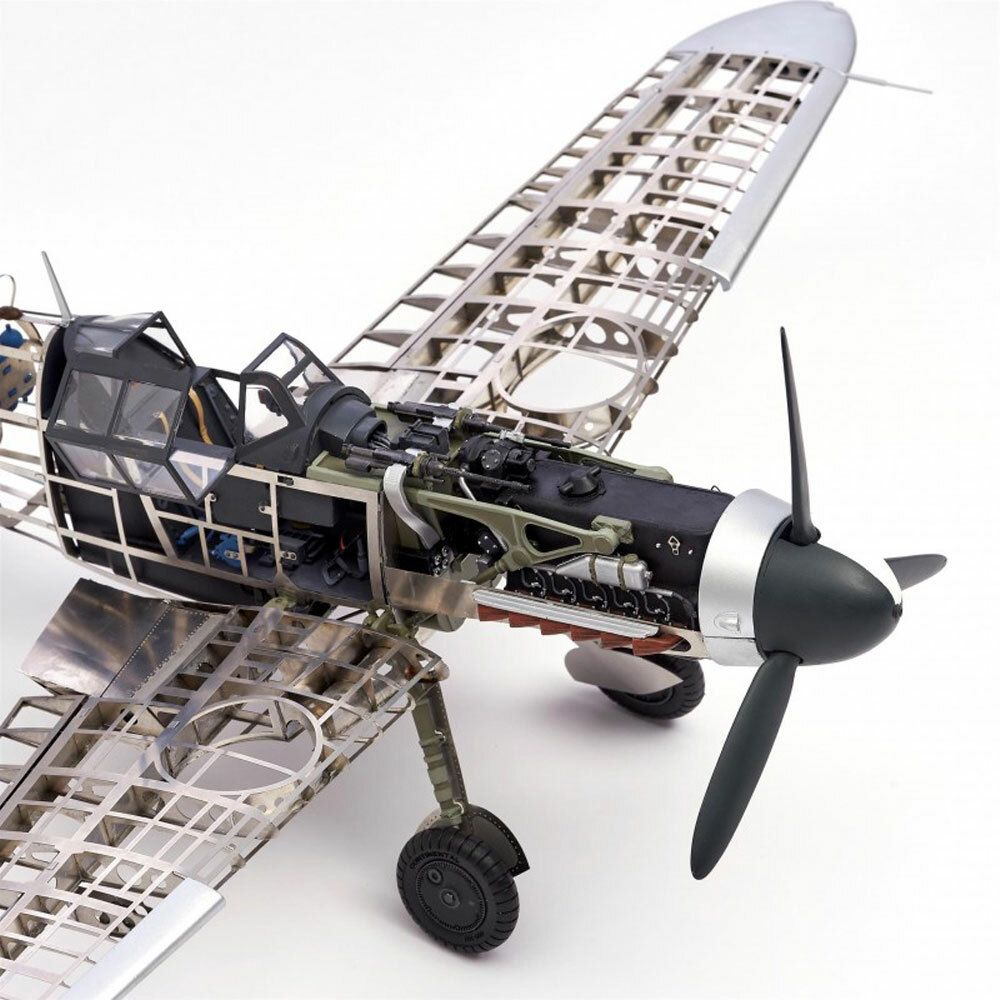 Re-start the engines! The very important German WWII fighter airplane Messerschmitt Bf109G has returned to be a scale model 1/16 made of high quality metal and plastic thanks to Artesania Latina. A fantastic non-flying modeling kit for initiated modelers that includes many moving parts and, in addition, as a bonus ... LED lights, engine and exhibition base in methacrylate!

HISTORY OF THE Bf109 FIGHTER: REALLY MODERN FOR THE AGE

The German WWII Messerschmitt Bf109 fighter plane was designed at the beginning of the 30s of the last century by the Bayerische Flugzeugwerke (BF). It became the most produced at the factory with almost 34,000 units - none has exceeded that amount - and one of the first really modern of its times for its fully metallic monocoque, its closed cockpit and retractable landing gear.

As a curious historical fact, it participated in the Spanish Civil War to test its elements and characteristics, but logically it was during the second global war when it was a fundamental part of the german air fleet, specifically, the Luftwaffe. It was present until the development of the first aircraft reactors, until the end of the aforementioned war.

What were its functions exactly? At first, it was created expressly as an interceptor, however, it ended up acting as escort of bombers, fighter-bomber, day and night fighter, ground attack aircraft and, finally, reconnaissance aircraft. The Messerschmitt Bf109 achieved more than 900 victories, especially when it was part of the Jagdgeschwader 52 fleet.

The high quality metal and plastic modeling kit of the most important German fighter plane of World War II, Messerschmitt Bf109G, contains an exceptional aviation model that is already the most faithful replica of the market.

Aimed at initiated modelers, the 1/16 scale model of the Bf109G has a system of tabs that allows the assembly of the aircraft structure almost without the use of glue. Precisely, the metal parts to build come in photoetched stainless steel sheets and injected die-cast and plastic.

It is a very robust, large and strong airplane model, resembling the fighter that crossed the skies back in the 30s and 40s of the last century. Once finished, this fabulous miniature is 22.24’’ length, 24.40’’ width and 8.07 height, without forgetting its 3.52 lb of weight.

Outstanding is its great realism! Also provided by its moving parts, such as manual retractable landing gear; its practicable cockpit canopy and for its workable ailerons, flaps and tail.

In addition, to the delight of the modelers, the modeling kit of the Messerschmitt Bf109G 1/16 scale includes ... Two free bonus! A methacrylate base with engraved nameplate so that the airplane model is perfectly exposed and, surprisingly, a motor of low revolutions that provides movement to the propeller, and LED lights of position in wings and tail, and also in the cockpit, created with all its details! Three AAA batteries, not included in the kit, are necessary to achieve this movement and lighting.


The metal and plastic model of the Messerschmitt Bf109G is, in short, a museum masterpiece that every modeler must build because it will bring great fun and satisfaction.