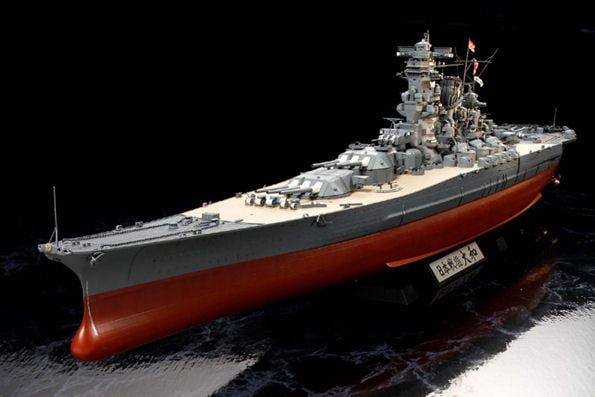 Based on the latest historical research, this famous WWII battleship has been reproduced down to the finest detail in this 752mm long 1/350 scale model kit.

Even parts which had not been seen before in model form, such as the turret barbettes, have been reproduced as Tamiya challenges conventional ship model standards.

This model accurately depicts the Yamato with increased anti-aircraft armament as she appeared on her final mission to Okinawa and may be assembled for either full-hull or waterline display.

With many revolutionary features incorporated into her design, the Yamato was completed in December 1941, and met her final fate at the hands of American Navy carrier aircraft in the South China Sea while on a one-way mission to Okinawa

This is a plastic model assembly kit of the Japanese battleship Yamato.

10 x 17ml Vallejo model paints. Vallejo paints are supplied in plastic bottles of 17ml with an eyedropper device which keeps paint from drying and prevents spills. The model color range has been specifically developed for adherence on difficult surfaces such as metal and plastic, but the product is not toxic, not flammable, and does not give off noxious fumes.