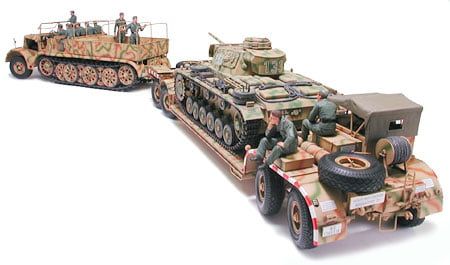 A highly detailed kit for the enthusiast. As WW2 progressed, the vehicles used on the battlefields became larger and larger. When these mammoth machines broke down or became damaged, the task of bringing them back from the front lines was not an easy one. The German 18 Ton Heavy Half-Track "FAMO" Tank Transporter Sd.Ah.116 was one of the vehicles that contributed to this task.

The FAMO saw widespread use in World War II, and was the heaviest half-track vehicle of any type built in quantity in Germany during the war years. Its main roles were as a prime mover for very heavy towed guns such as the 24 cm Kanone 3 and as a tank recovery vehicle. Approximately 2,500 were produced between 1938 and 1945.

5 x 17ml Vallejo model paints. Vallejo paints are supplied in plastic bottles of 17ml with an eyedropper device which keeps paint from drying and prevents spills. The model color range has been specifically developed for adherence on difficult surfaces such as metal and plastic, but the product is not toxic, not flammable, and does not give off noxious fumes.