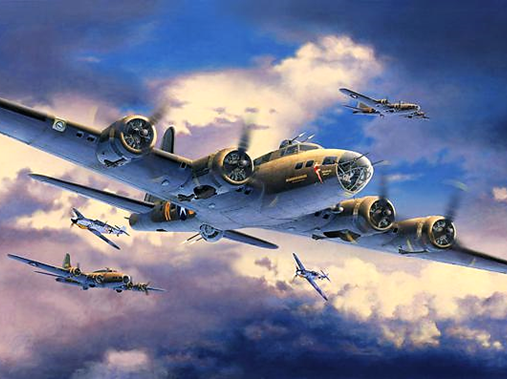 This is an excellent 1:72 scale kit with good mouldings and finely recessed panel lines. Includes a great decal sheet.

During World War II, the Boeing B-17 was the best-known heavily armed strategic bomber, although with a total build of 12,677 it was far from the most numerous plane of its type. It kept the name "Flying Fortress" that it received from an American journalist at the time of its first flight.

The Boeing B-17F was the first mass-produced Flying Fortress. The most famous plane of this series was the B-17F-10-BO made by Boeing which on 15th July 1942 was delivered to and put into service with 324 Bomber Squadron, 91 Bomber Group at Bassingbourn, England. The crew gave it the nickname "Memphis Belle" after the lady-friend of the pilot Lt. Robert K. Morgan. Its fame resulted from the fact that it was officially the first US Army Air Force bomber in Europe to survive 25 missions and it was made the star of a Hollywood propaganda film. After this mission the Memphis Belle and its crew were ordered back to the USA. Later it was bought by the city of Memphis and set up as a memorial in the open air. In 2004 the B-17F underwent a complete restoration. Today the Memphis Belle is again accessible to the public.

7 x 17ml Vallejo model paints. Vallejo paints are supplied in plastic bottles of 17ml with an eyedropper device which keeps paint from drying and prevents spills. The model color range has been specifically developed for adherence on difficult surfaces such as metal and plastic, but the product is not toxic, not flammable, and does not give off noxious fumes.