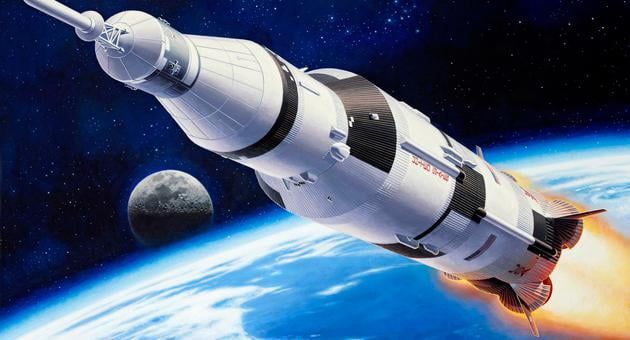 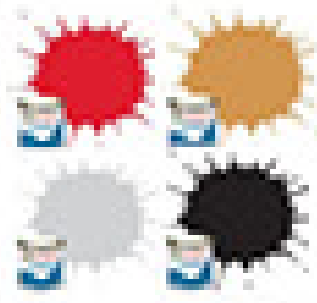 On 16th July 1969 at 9.32am. the most important voyage in human history started: the lift-off of the gigantic Saturn from Cape Canaveral. The giant Saturn V consisted of three main stages, was 110m high and weighed 3,000 tonnes. It could carry a payload of 50 tonnes and reached a speed of 11,2 km/second. The 394,000 km long voyage to the moon lasted for 72 hours.

After reaching a low orbit round the earth the top unit with the Apollo capsule received sufficient thrust from the third stage of the launch vehicle to reach the required speed to travel to the moon.

Later the Apollo unit separated from the rocket, rotated and drew the lunar module from its protective sheath. When these linked units reached the moon they swivelled into an orbit round the moon. After a few lunar orbits, the lunar module with astronauts N. Armstrong and E. Aldrin on board, left the command module in which astronaut M. Collins remained.

The lunar module made a landing in the "Sea of Tranquillity" after the retro motor was fired twice. Suddenly, at a height of 1 km, two alarm signals were sounded by an overloaded computer; but they were only a technical hitch.

After the landing the astronauts put on their portable life-support systems and opened the hatch. Armstrong was the first to clamber out and become the first man on the moon. His famous first words were "This is only one small step for a man but a great leap forward for mankind". The astronauts spent two and a half hours on the moon, collecting surface samples and setting up scientific instruments. They moved in 1/6 of earth's gravity.

On completion of their mission the astronauts took off in the top stage of the lunar module, went back into orbit and docked with the Apollo capsule, into which they transferred and the first stage was jettisoned. The astronauts ignited the main engine to leave the lunar orbit and flew back to earth. (Speed 42,250 km/h). Back in the earth's atmosphere, on 24th July the Apollo capsule floated down on three parachutes at a speed of 362 km/h to land on water. The mission had lasted a total of 195 hours. Valuable moon rocks and hundreds of photos were tangible evidence of this historic mission. Millions of viewers followed their progress on their TV screens.