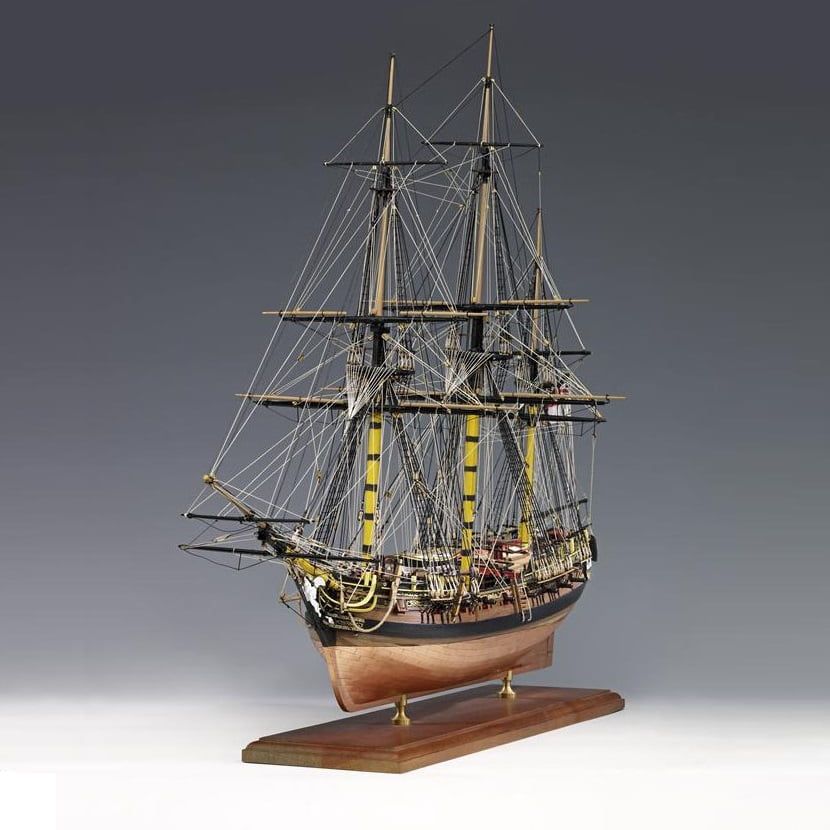 Please Note: Base board and brass pedastals are NOT included

Full size plans, which include very easy to follow rigging detail. The copper plates for below the waterline are of a completely new design. They are so accurate that there is a left and right side to the plates, and there are no unseemly over protruding nail heads, everything is scaled at 1:64th.

Accompanying the plans is a fully illustrated building manual, taking you through every stage of the critical hull construction. There is also a full English instruction booklet, describing every detail of each stage of the main construction, along with the history.

H.M.S. Pegasus was the sixth vessel built of the Swan Class of ship rigged sloop, of which twenty five of the class were built from 1766 to 1780. Pegasus, as with the entire Swan class was designed by Williams and her construction was ordered by the Admiralty on 1st August 1775 to be built at Sheerness Dockyard. The keel was laid in May 1775 and launched on 27th December 1776. The Swan class of 6th Rate sloops were unusually attractive for the class of vessel, with not only very sleek hull lines but also the unusual amount of decoration for the size of vessel. They were built just before the Admiralty issued orders that all vessels (especially lesser rates) were to have the minimal amount of decoration and carvings to save any unnecessary costs, due to the ever continuing war with France and other nations. There is little remaining about H.M.S. Pegasus’ operational career, but from what little evidence there is, Pegasus was commissioned mainly for convoy escort duty and dispatch duty. Pegasus had a very short operation career, foundering off Newfoundland on 31st October 1777, her sister, H.M.S. Fly also foundered off Newfoundland some years later in 1802.