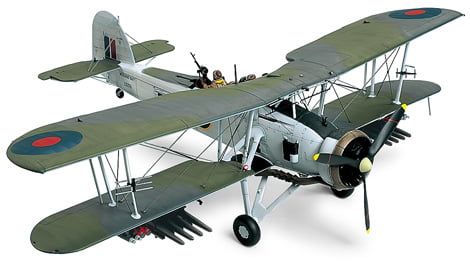 Tamiya have produced this highly detailed 1:48 scale assembly kit model of the Fairey Swordfish Mk.II. for modellers to enjoy building. A stunning reproduction which will be a welcome addition to the WWII aircraft model makers collection.

About the Swordfish Mk.II
Affectionately known as the 'Stringbag' by those who flew them, the Fairey Swordfish torpedo bomber was already outdated when WWII broke out, but nonetheless provided valuable service and achieved such notable missions as the attack on the Italian Navy at Taranto and damaging the German battleship Bismarck. As newer, faster aircraft were developed to replace it, the Swordfish was modified to become an anti-submarine aircraft. The Mk.II featured metal lower wings that allowed it to be armed with ten rockets or depth charges, which, along with its sturdy design and long endurance, made it an exceptional anti-submarine aircraft for use on merchant aircraft carriers in the Atlantic convoys.

About this Tamiya Fairey Swordfish Kit