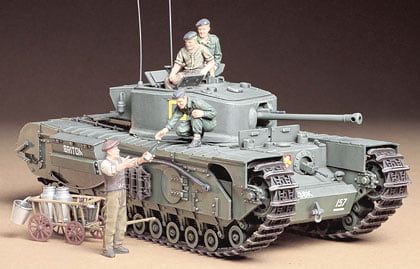 £22.95
Out of stock
Notify Me
Details
Delivery
Why Buy From Us?

Despite the serious teething problems in its mechanics, the British Infantry Tank MK.IV or the "Churchill" went on to earn a high reputation among the World War II British armoured fighting vehicles. Following the tradition of the rhombic-shaped predecessors during World War I, its design priority was placed on heavy armour, a wide trench crossing capacity and the ability to travel across the shell-torn battlefields. Speed was not considered to be essential, since its main role would be to escort and support the infantry. Christened the "Churchill" after the Prime Minister of Great Britain, it began to arrive at the Tank Regiments in June 1941. The Churchill tank stable is classified into several types according to the main armament used, or the hull and turret construction. The MK.VII was radically different from the earlier models, with the hull and turret completely new in structure. The entire hull was welded, rather than being riveted. The maximum armour thickness was increased from 102mm to 152mm. Consequently, the weight augmented to 40 tons, resulting in a reduction in top speed from 18 to 13 mph. The turret was redesigned for higher strength and improved productivity. The four walls were a single casting of varying thickness, onto which the roof plate was welded. The powerful 75mm gun was adopted as the main armament. The active service of the Churchill tanks, especially from D-Day onwards, is worthy of the name of the principal British tank.