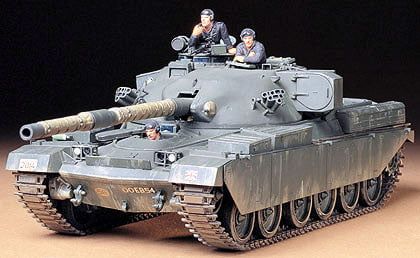 The Chieftain Tank is one of the best known of the present generation of battlefield weapons, and is one of the most heavily armoured and armed fighting vehicles in service anywhere today. It has not been without its detractors or critics, however, and there has been a running debate by military commentators for several years past on the relative merits of the British Chieftain Tank compared with the main battle tanks of other great military powers- the United States, Soviet Russia, France and West Germany - whose present equivalent designs afford a fascinating contrast with Chieftain in many key aspects.

Chieftain Mk 5: First announced in 1970, this was the main type in service in the mid 1970's. Further engine modifications bring the power output up to 750bph, with consequent improvement in overall performance, and revision of the ammunition stowage arrangements enabled 64 rounds to be stowed. Splash plates have been added on the glacis.

About this Tamiya Chieftain Tank Kit