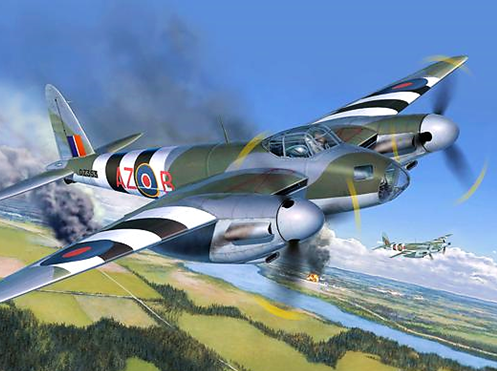 The Mosquito, affectionately known as the 'Wooden Wonder' was one of the fastest and most powerful RAF bombers of the Second World War. However they very nearly never existed due to the Air Ministry's opposition to de Havilland's original proposal for an unarmed, all-wooden bomber which almost forced de Havilland to abandon the design altogether.Thanks to some behind-the-scenes lobbying, the Air Ministry reluctantly agreed to progress with the design and the Mosquito Mk.IV was born.

Up until 1945 a total of 5500 of these aircraft were built. When the Mosquito was first introduced it was faster than all of the German fighters. On the 31.1.1943, three Mosquito bombers dropped their bomb-loads in the near vicinity of Reichsmarshal Goering as he wanted to take a parade in Berlin. They departed unhindered despite a huge number of enemy fighters being launched. It could reach an impressive maximum speed of 611 km/h (380 mph), range 3272 km (2032 miles), and could carry a maximum bomb load of 906 Kg (2000 lbs).

This popular kit is described by Revell as 'challenging' but will be suitable for enthusiastic amateurs as well as more experienced modellers.

7 x 17ml Vallejo model paints. Vallejo paints are supplied in plastic bottles of 17ml with an eyedropper device which keeps paint from drying and prevents spills. The model color range has been specifically developed for adherence on difficult surfaces such as metal and plastic, but the product is not toxic, not flammable, and does not give off noxious fumes.