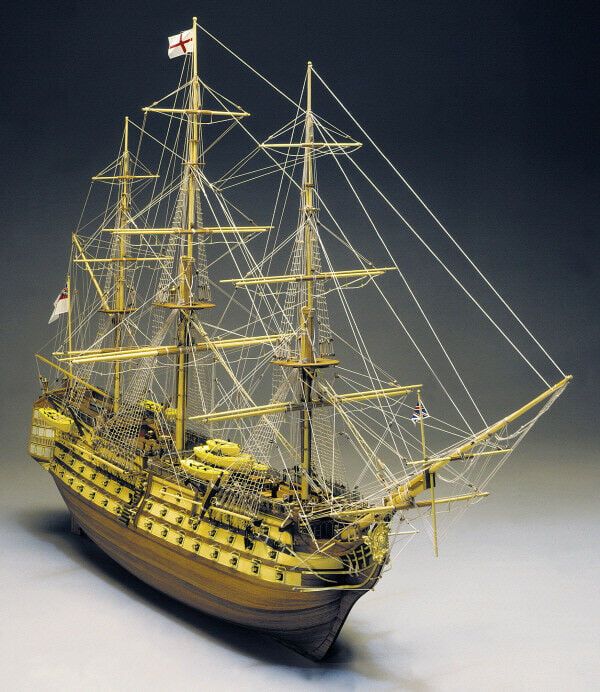 Early 19th Century. Lord Nelson's Flagship, The Victory, famous for the Battle of Trafalgar in 1805.

All sheet ply sections are laser cut for accuracy.

HMS VICTORY is the flagship of famed Admiral Lord Nelson at Trafalgar, the HMS Victory is the oldest surviving warship still in use (she is presently the flagship of the Second Sea Lord, Commander in Chief Naval Home Command) and sits in dry dock in Portsmouth as a museum ship.

In December 1758, the commissioner of Chatham Dockyard was instructed to prepare a dry dock for the construction of a new 100-gun first-rate ship. This was an unusual occurrence at the time; during the whole of the 18th century only ten were constructed-the Royal Navy preferred smaller and more manoeuvrable ships and it was unusual for more than two to be in commission simultaneously. The outline plans arrived in June 1759 and were based on HMS Royal George which had been launched at Woolwich Dockyard in 1756. The keel was laid on 23 July 1759 in the Old Single Dock (now No. 2 Dock), and the name was finally chosen in October 1760. It was to commemorate the Annus Mirabilis or Year of Victories, of 1759. In that year of the Seven Years' War, land victories had been won at Quebec, Minden and naval battles had been won at Lagos and Quiberon Bay. There were some doubts as whether this was a suitable name since the previous first-rate Victory had been lost with all on board in 1744. Once the frame had been constructed it was normal to cover the ship up and leave it for several months to season. However, the end of the Seven Years' War meant that she remained in this condition for nearly three years, which helped her subsequent longevity. Work restarted in autumn 1763 and she was finally launched on 7 May 1765 having cost £63,176 and 3 shillings (present day £50 million) and used around 6000 trees, 90% of which were oak and the remainder elm, pine and fir. There being no immediate use for her she was placed in ordinary- in reserve having been roofed over, demasted and placed under general maintenance-moored in the River Medway for 13 years until France joined the American War of Independence.

Set of 6 lifeboats for the 1:98 HMS Victory 776 with plastic hull and wooden interior. This new design has laser cut ply inserts and contains a complete oar set.