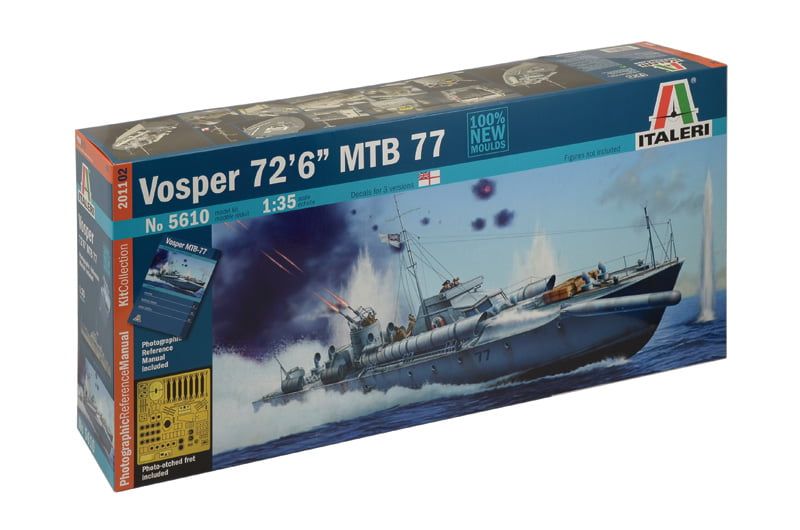 This stunning example of the Vosper MTB 77 has been recreated in amazing detail by Italeri.

The model measures an impressive 630mm in length and containes authentic decals and photo etched parts.

Italeri have used all new moulds for this model.

Vosper company became famous, during the Second World War, for the production of small and fast Motor Torpedo Boats (MTB) and Motor Gun Boats (MGB) for the Royal Navy. Among the various boats in production, the Vosper MTB 72’6” were characterized by a significant life cycle with different mission profiles as the coastal patrol and the anti-submarine support in the North Sea and English Channel. Moves from 3 engines with and impressive power of 4,200 hp, Vosper MTB was able to reach a speed close to 40 knots (70 km/h). The first versions were introduced at the beginning of the war but were gradually introduced new variants, type I and type II, which were characterized by a different combination of offensive and defensive weaponry. They were usually armed with 457 mm torpedo tubes., depth charges, and 0.303” Vickers machine guns or, more rarely, from 0.5” Vickers machine guns , for air defence. The crew consisted of 10 to 13 men

Vallejo paints are supplied in plastic bottles of 17ml with an eyedropper device which keeps paint from drying and prevents spills. The model color range has been specifically developed for adherence on difficult surfaces such as metal and plastic, but the product is not toxic, not flammable, and does not give off noxious fumes.