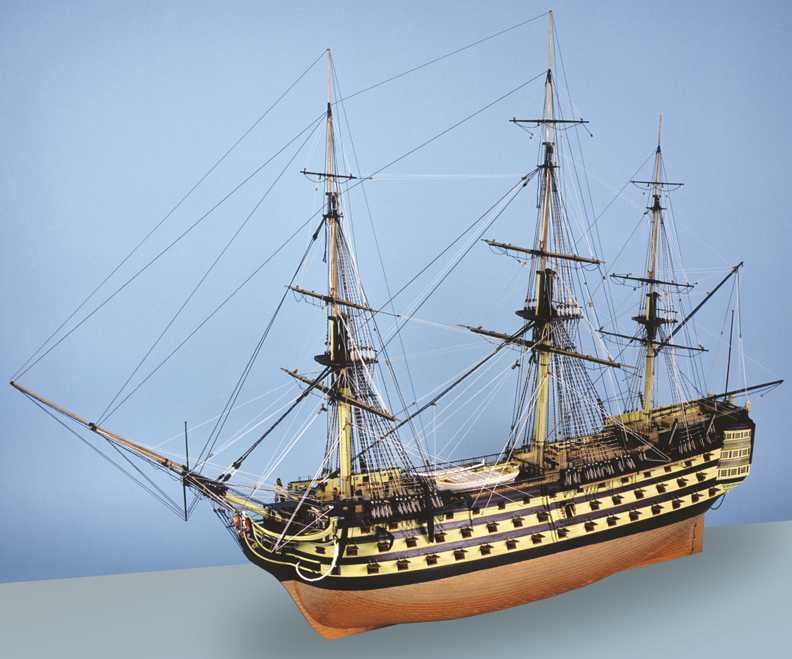 Launched on May 18th 2003, exactly 198 years after Nelson first hoisted his flag onboard Victory, the kit includes:

18 sheets of fully detailed actual size plans and a comprehensive, full colour, step-by-step instruction manual including constructional photos of the prototype. All this enables you to build the most authentic model of H.M.S. Victory as she appeared at Trafalgar.

As well as this, the kit also includes the timber work to produce the model to the current specifications as she stands in Portsmouth, for example timberheads, capping and hammock cranes for the forecastle.

After more than two years of extensive research and development, using information and sources previously unavailable, this is the most historically accurate, highly detailed kit of Victory in her Trafalgar condition available.

Our model is very different to other manufacturers, and the amendments are the result of our own research verified by Mr. Peter Goodwin, and further research provided by Mr. Goodwin.

Mr. Goodwin is the Keeper and Curator of H.M.S. Victory in Portsmouth and is currently heading the project, researching Victory's true Trafalgar configuration. It is the intention of the Navy to restore Victory to this configuration by the 2005 bicentennial celebrations. Details of the planned amendments were due for release today but have been delayed until October 21st this year. As soon as this information is available it will be posted on our web site.

Forever associated with Nelson's last battle, H.M.S. Victory is one of the most famous ships of all time, and is now preserved as a major part of the Royal Naval Museum in Portsmouth. The ship's survival is particularly appropriate since Victory is not only an example of the ultimate sailing warship ~ the three decker First Rate ~ but she was also the most popular and successful 100-Gun ship of the period.
Forty years old by the time of Trafalgar (1805), she had been the flagship of half a dozen Admirals, and was to continue in active service until 1812.