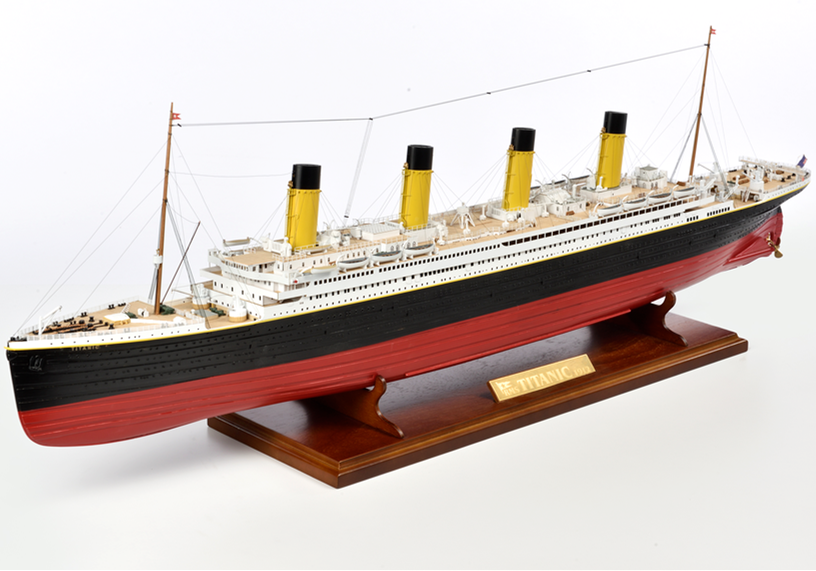 Eight sheets of precise plans and a 32-page book of photographic instructions guide you to a beautiful finish.

Baseboard and brass pedestals are included with this model although not neccassary the same style as shown in image.

SS Titanic (or rather RMS, since she was carrying the Royal Mail), with her sister ships Olympic and Britannic, was one of the largest transatlantic passenger liners owned by the White Star Line. Built by Harland and Wolff in Belfast, she was popularly considered unsinkable. But this myth was created by the press and not by the owners (who, however, made no effort to deny the claim), and was due to the fact that the liner was capable of remaining afloat even with four watertight compartments completely flooded. Unfortunately, on the night she struck the iceberg the number of breached compartments amounted to six. She sank on her maiden voyage on the night of the 14th April 1912. The tragedy, in which 1503 of the 2200 souls aboard lost their lives (40% of first class and 70% of third class passengers), caused an enormous outcry and led to the first ever conference dedicated to maritime safety. The Titanic disaster ranks as one of the worst peacetime maritime tragedies in history, and is by far the most famous.