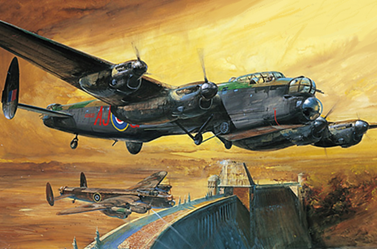 The Avro Lancaster was one of the RAF's mainstay aircraft of WWII and it was such a capable design that it was modified to conduct special missions. Perhaps the most famous of these was the mission to destroy hydroelectric dams which powered Germany's main industrial region. Sir Barnes Wallis created a bomb which would skip across the surface of the dam's reservoir, sink next to the dam wall, then explode to breech the dam with its shock waves. 19 Lancasters were modified to carry this special bomb and these "Dambusters" conducted a successful attack on three of the dams on May 17, 1943. In addition, Lancasters nicknamed "Grand Slam Bombers" were used to carry the largest conventional bombs of WWII, the "Grand Slam." After being dropped from high altitudes, these bombs would penetrate deep into the target before exploding, destroying it with earthquake-like shocks. They were used against fortified structures such as U-boat pens and railroad bridges.