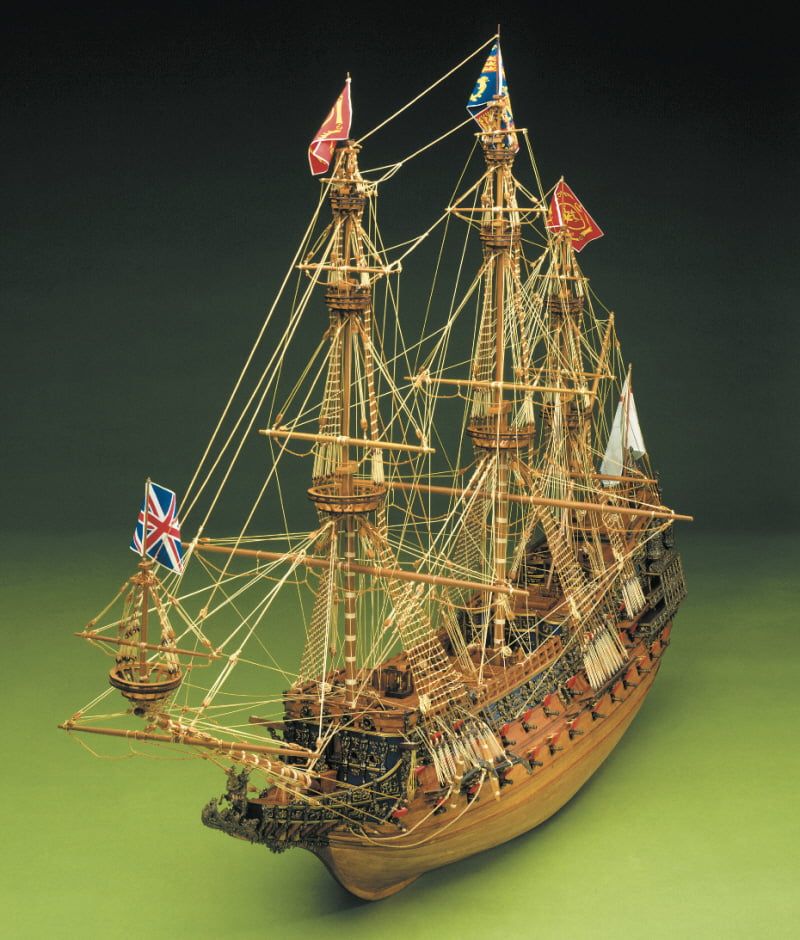 A very impressive kit. This is the one that every boat modeller wants to build !

The Sergal kit of the Sovereign is every bit as magnificent as the original. Authentic detailing includes 675 solid bronze ornamental pieces to adorn her stern, decks and hull -- each cast individually by the lost wax method. The hull is double-planked in basswood and walnut, and all wooden parts are laser cut for a perfect fit. Blocks and deadeyes are pre-finished walnut. Other fittings are brass, copper and cast white metal. You'll arm your vessel with 102 burnished metal cannon, and rig her with several diameters of seized cotton line. Eight sheets of plans are accompanied by a comprehensive instruction book. A full colour poster is provided with the kit to show the beauty of the finished model.

This beautiful ship was commissioned by King Charles 1st and designed and built by Phineas Pett. She was launched in 1637 and set the design of ships for the next 200 years. No such lavish display of ornamentation had ever been seen before or since and the cost was astronomical.

HMS Sovereign of the Seas was a 17th century British Royal Navy first rate ship of the line of 100 guns, later known as just Sovereign and then Royal Sovereign. It was built by Peter Pett (later a Commissioner of the Navy), under the guidance of his father Phineas, the King's master shipwright, and was launched at Woolwich dockyard on October 13, 1637. As the second three-decked first-rate (the first three-decker being Prince Royal of 1610), she was the predecessor of Nelson's Victory, although Revenge, built in 1577 by Mathew Baker, was the inspiration providing the innovation of a single deck devoted entirely to broadside guns.

She was the most extravagantly decorated warship in the Royal Navy, completely adorned from stern to bow with gilded carvings against a black background, and the money spent making her, £65,586, helped to create the financial crisis for Charles I that contributed to the English Civil War. Charles had imposed a special tax, the "Ship Money", to make possible such large naval expenditure. The gilding alone cost £6,691, those days the price of an average warship. She carried 102 bronze cannon (Charles explicitely ordered such a high number) and was thereby at the time the most powerfully armed ship in the world. Until 1655 she was also exceptionally large for an English vessel; no other ships of Charles were heavier.
Sovereign became leaky and defective with age during the reign of William III, and was laid up at Chatham, ignominiously ending her days by being burnt to the water line as a result of having been set on fire either by accident, negligence or design.