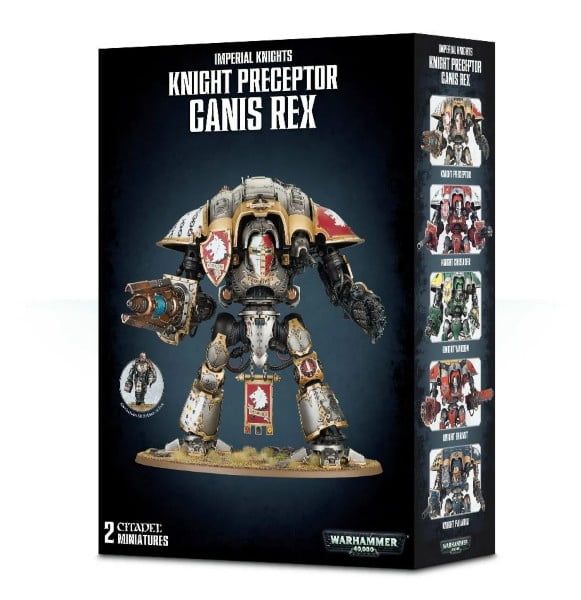 The Knight Preceptor is a Questoris-class close-ranged powerhouse. Its design is intended to exemplify the core tenets of the Code Chivalric in battle:

To this end, they are armed with a reaper chainsword or thunderstrike gauntlet and the rare and terrifying las-impulsor. Canis Rex is a notable Knight Preceptor, who escaped the tortures of the Iron Warriors and has punished the scions of chaos with vehemence and fury ever since.

This multi-part plastic kit contains the components necessary to build a Knight Preceptor. This is a serious bit of kit – it contains an entire Imperial Knight Warden kit, along with an extra 37 components which upgrade the basic Knight into the Preceptor – and, optionally, the specific named Preceptor Canis Rex. These components can be broken down as follows:

A frame of Imperial Knight carapace components including:

A frame of Imperial Knight leg components, including:

A frame of Imperial Knight weapons, including:

An Imperial Knight Warden frame, including:

Using those frames to build the basic Imperial Knight structure with either a reaper chainsword or thunderstrike gauntlet, the following is used to complete the Knight Preceptor:

A frame of Knight Preceptor components, including:

This kit can be built as either a Knight Preceptor, Canis Rex, Errant, Paladin, Warden, Gallant or Crusader – the weapons are interchangeable and can be used as spares for any other Knight kits you might have.

The Knight Preceptor is supplied as 250 components, and includes a Citadel 170mm Oval base, a Citadel 25mm Round base for the pilot on foot, and a transfer sheet featuring heraldry for Imperial Knights and heraldry specific to Canis Rex.