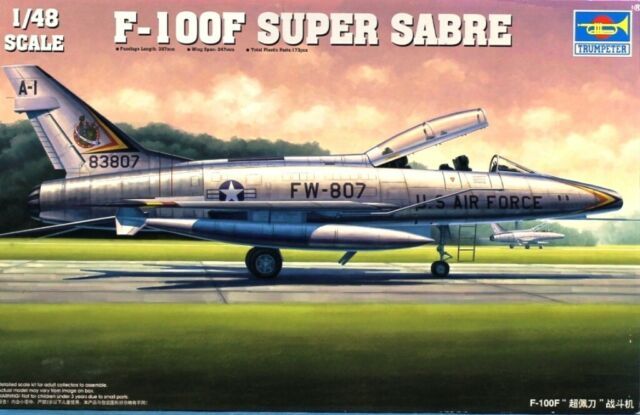 While the F-100A, F-100B (F-107A), F-100C, and F-100D were all single-seat fighters, the USAF realized that they needed a two-seat trainer to properly acclimate pilots into the world of supersonic flight and some of the unique flying characteristics of the world's first production supersonic aircraft. Since its introduction in the late 1950s, the F-100F served as the high performance transition trainer which helped to reduce accident rates.

The Vietnam air war revealed how unprepared the Cold War Air Force was for a counter-insurgency war, many seasoned pilots were able to dust off their combat experience over Korea a decade earlier and make use of what aircraft were available. The F-100 Super Sabre was sent over to provide protection for the fighter bombers going north from marauding MiGs. The adversary pilots flyng the North Vietnamese MiGs were able to exploit the weather for hit and run attacks on the fighter bombers and the F-100's lack of radar rendered it helpless to find and engage the enemy. The F-100 was shifted over to the strike and close air support missions.

While many folks are aware of the exploits of the F-100 in its mud-moving mission, not many appreciate the role of the F-100F in Vietnam, and how this one aircraft would shape the development of future aircraft and tactics. Two key missions were performed by the F-100F - Misty and the Wild Weasel.

Misty - In the early days of the Vietnam war, the Forward Air Control (FAC) mission was taken up by USAF pilots after the Army was shifted out of fixed wing air operations. These early USAF FACs carried on the mission of spotting targets for artillery and air strikes in the same aircraft, usually the O-1 Bird Dog or the follow-on O-2 Skymaster. Both aircraft had a top speed of Mach None which was ideal for spotting movement in the jungle, but also provided the enemy with easy targets. In some of the hottest areas, the survival rates for these FACs was not good. A new approach was developed to regain air superiority over these hot zones - Fast FACs. F-100Fs were rounded up from squadrons around the world and its two seats were usually manned by pilots, one to put eyes in the jungle while the other kept the aircraft out of that very same jungle. The squadron that took on the Fast FAC mission was the 416th TFS 'Silver Knights' assigned to the 37th TFW at Phu Cat AB, but everyone knew them by their callsign - Misty (the squadron commander's favorite song). The two-man concept and tactics developed by these crews made For more good reading, there are two really good books on the Misty FAC, Misty and Bury Us Upside Down.

Wild Weasel - As the air war carried on over Vietnam, the North Vietnamese received a new weapon to use against the Yankee Air Pirates - the S-75 Dvina (SA-2 Guideline). An emergency program was started to create a countermeasure for this new threat. The result was the APR-25 receiver group that could be installed in a tactical aircraft and give basic directions to an active Fan Song radar. This system was secretly installed in a handful of F-100F Super Sabres creating a new mission - the Wild Weasel. After some training with this new system at Eglin AFB, these new Weasels were deployed into theater where the newly trained crews started to hunt down SAM sites and develop defensive tactics through trial and error to get close enough to a SAM site to mark it for a flight of supporting F-105 Thunderchiefs to bomb the site into oblivion. The Weasel concept was battle proven and not without casualties. When it was time to get out of Dodge, the F-105s would egress out of the area at supersonic speed leaving the lone Weasel to motor out the best they could and developing their motto - First In, Last Out. While the Weasel mission would soon transition to the F-105F, it was the F-100F that was first into combat and the first Wild Weasel.

This model kit requires paints and glue to be completed. Not included. Available separately.