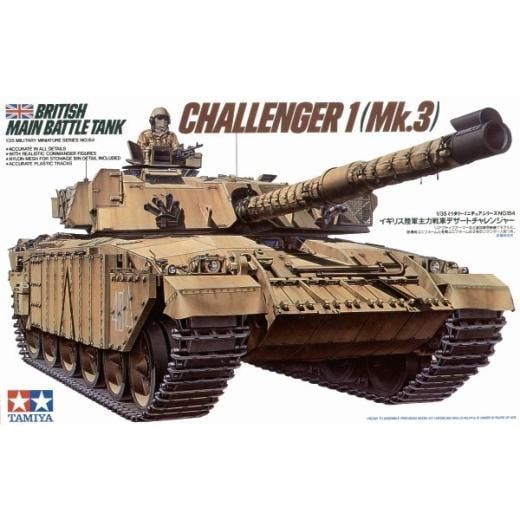 Accurate in all details

History of the Challenger 1 (Mk.3)

Great Britain has a long and interesting history of armoured vehicle use and development. In fact they coined the term "TANK" for such weapons, and are known as well, for their superb designs. Their latest version of the Challenger Main Battle Tank is regarded as one of the most advanced armoured fighting vehicles in service in the world today. Modern technology has enabled several outstanding improvements in its firepower, crew protection, and mobility, to meet the demands of today's battle conditions.

The Challenger demonstrated and proved its combat worth during the recent Gulf Conflict. In addition to painting the tank with an overall sand colour, many modifications for desert operations were accomplished, including an improved cooling system; better air cleaners; a reinforced transmission; extra side skirts from Chobham armour for added protection, plus bolt-on Reactive armour applied to the frontal area; an additional 200 litres of fuel was carried in external tanks mounted on the rear of the tank, which greatly extended its range; extra external stowage bins; and the use of maintenance free batteries.

Despite operations in the harsh desert environment, the Challengers maintained an outstanding "in service" and availability figure that exceeded 90%. This achievement, along with its accurate and heavy firepower, pointed to the Challenger as being one of the best main battle tanks used during the Conflict.