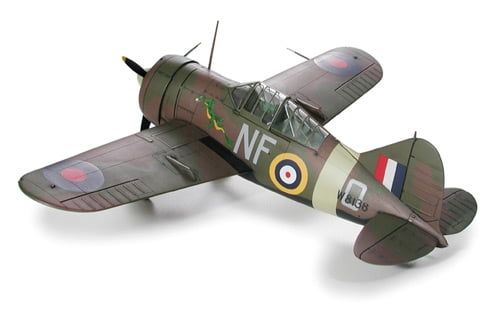 Tamiya 1/48 Brewster B-339 Buffalo - Pacific Theater : Highly detailed 1/48 scale assembly model kit of the Brewster F2A-2 Model B-339 Buffalo, a variant of the Brewster Model 139 single-engine monoplane fighter aircraft. Originally developed in the late 1930's, the Brewster F2A Model 139 became the first monoplane fighter aircraft used by the U.S. Navy (Navy designation F2A). The Brewster Buffalo was considered outdated by the outbreak of the Second World War, and the type suffered considerable casualties when matched-up against more advanced fighter aircrafts such as the Japanese Zero. A number of the Brewster F2A-2 Model B-339 aircrafts were exported to Britain and the Netherlands for used by the British Royal Air Force and the Netherlands East Indies Army Air Corps to protect colonial outposts in Singapore, Malaya and Burma.

Starter Paint Pack Includes:
4 x 17ml Vallejo model paints. Vallejo paints are supplied in plastic bottles of 17ml with an eyedropper device which keeps paint from drying and prevents spills. The model color range has been specifically developed for adherence on difficult surfaces such as metal and plastic, but the product is not toxic, not flammable, and does not give off noxious fumes.