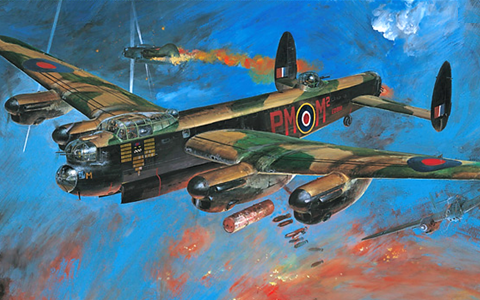 This 1:48 scale model of a Avro Lancaster heavy bomber aircraft will give hours of modelling pleasure with its detailed parts and markings. The extra parts that Tamiya have provided allows the modeller to produce various versions of the plane, with or without engine covers, and early to late types of the Mk.I and Mk.III variants can also be reproduced.

The Avro Lancaster was one of the RAF's main heavy bombers during the WWII. The prototype flew in January 1941 which featured 4 Rolls-Royce Merlin engines on its wings. The Lancaster had a 10m long bomb bay which took up nearly half the length of its fuselage, and coupled with its strong airframe, this enabled the Lancaster to carry bombs up to 9,856kg in weight. The Mk.I was equipped with Rolls-Royce Merlin engines, and the Mk.III was equipped with Merlin engines built by Packard in America; a total of 7,377 Lancasters were produced until the end of the war. The Lancaster first saw action in March, 1942 and went on to fly as the main nighttime bomber over Germany in the latter half of the war and dropped 608,612 tons of bombs in 156,000 sorties overall. The Lancaster caused severe damage against German industrial output and contributed to the victory of the Allied Forces. The Lancaster along with the Spitfire and Mosquito can be considered a Fearless Nighttime Bomber, and one of Britain's best aircraft of the war.