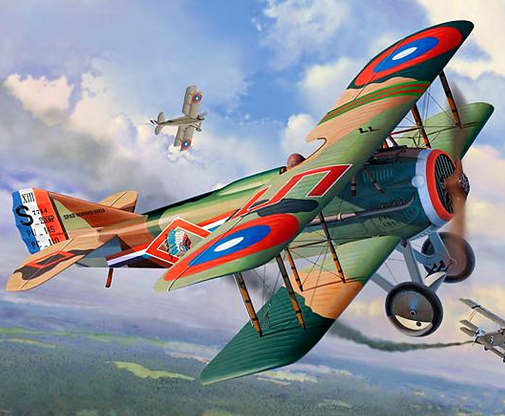 The SPAD XIII is one of the Allies most successful fighter aircraft of the First World War. After faults were eliminated in the Spring of 1918 this sturdily built aircraft possessed very good drive characteristics and was fast and agile at altitudes above 1000 metres (3000ft). The SPAD XIII was powered by the new Hispano Suiza engine, a water-cooled in-line engine developing 220 bhp and was able to reach 2000 metres (6000 feet) in 5 1/2 minutes. Its armament consisted of 2 Vickers MG.

Nine French factories produced around 7300 of these aircraft. In total 80 French fighter squadrons and 15 Squdrons of the US Air Force equipped with the SPAD XIII stood opposite the German Airforce at the end of the war.

In service since the summer of 1916 the French SPAD VII - armed with a single machine gun - was at the latest by the spring of 1917 out-gunned by the German single seat fighters fitted with twin machine guns. SPAD chief engineer Louis Bechereau who had since 1909 successfully developed racing airplanes for the former company owner Louis Deperdussin, constructed the prototype SPAD XIII to fit the 50 hp stronger 200 hp Hispano-Suiza 8B engine and carry two Vickers .303 MG with an 800 round supply of ammunition. The new aircraft's fire-power was increased enormously with this modification although the aircraft had become bigger and 200 kg (440 lbs) heavier. The maiden flight took place on 4 April 1917. Although the test flights indicated an improved flight performance, they also however confirmed a certain sluggishness near the ground and some problems with the armament, engine, engine-cooling, and insufficient field of view for the pilot.