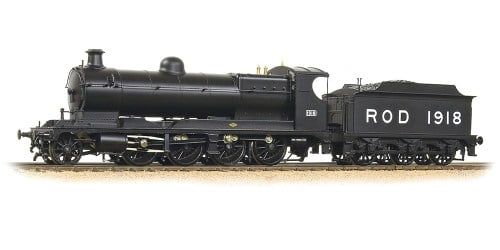 • Representation of the inside valve gear

The Railway Operating Division (ROD) 2-8-0 is a type of steam locomotive which was the standard heavy freight locomotive operated in Europe by the ROD during the First World War. The ROD adopted the Great Central Railway Class 8K 2-8-0 designed by John G. Robinson in 1911.

There were three batches of orders. The first batch was placed between February and June 1917 for 223 locomotives, the second was for 100 locomotives, placed between February and August 1918, and the third order for 188 more in Autumn 1918 was intended to sustain the UK's locomotive manufacturing industry after the war. The 521 ROD 2-8-0s were built as follows: 369 by the North British Locomotive Company, 82 by Robert Stephenson and Company, 32 by Nasmyth, Wilson and Company, 32 by Kitson and Company and six by the Great Central Railway's Gorton Works.

Of the initial order for 325 locomotives, 311 were shipped to France for war service. The locomotives were mainly used to haul military supply and troop trains, plus some services for civilians. After the war British railway companies had a backlog of locomotives that required overhaul and repair: 498 ROD 2-8-0s were loaned to 9 railway companies between 1919 and 1921 to cover goods traffic while the backlog was cleared. The ROD 2-8-0s were then placed into storage around the country until they were disposed of to railway companies. The Great Western Railway bought 20 ROD locos in 1919 and a further 80 in 1925. The locomotives were widely spread over much of the GWR system, being used on heavy freight trains. The first withdrawals were made in 1927, but 45 survived to be taken over by British Railways in 1948 and the last three survivors were not withdrawn until October 1958.

The London and North Western Railway bought 30 locos in 1920. In the grouping in 1923 these entered the stock of the London, Midland and Scottish Railway, which bought another 75 of the class in 1927. The ROD's range of operations on the LMS was restricted by its high axle loading. Withdrawals began in 1928 and the last was gone by 1932. Some of the LMS examples were exported to China.

The largest purchaser of the RODs was the London and North Eastern Railway which bought 273 between late 1923 and early 1927 to supplement its 130 existing GCR Class 8K locos. The combined fleet served widely throughout the LNER system and many were modified over the years to prolong their useful life. In 1941 the War Department requisitioned 92 locomotives for use overseas. Withdrawal of the first ex-LNER RODs was made by British Railways in 1959 and the last was retired from the Doncaster area in April 1966.